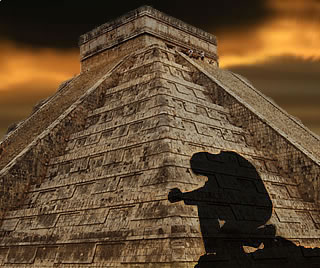 On December 21, 2012, the Mayan Calendar's 13th Baktun cycle will end. On this date, the world as we know it will also change. So it should. This is the natural order of our universe. It is the order of all things. Yet, despite the fact that change is normal and expected in everything that we know, there is a tremendous amount of anticipation for this one upcoming date of December 21, 2012 in particular. The reasons are many, both good and bad. For some, December 21, 2012 is the beginning of a new era, where humanity will evolve to a greater understanding of our place in the universe. To others, it is the much prophesied Apocalypse, or the doomsday end. Ironically, for most of the living decendents of the ancient Maya themselves, it's just the end of another calendar cycle or simply another day.

A quest for the truth regarding all the hoopla concerning the Mayan calendar's long count cycle end in association with a doomsday prediction raises a number of pertinent questions. The first most obvious is: What is the source of this association with an end of the world prediction and the Mayan calendar? Or rather in this case, the better question is: What is the original source for all of this public mis-information? Serious research regarding the answer to this question uncovers many things. Most importantly, it shows that the sources are from neither the ancient nor modern Maya themselves. So then, from where, who, and why do these false claims arise?

Certainly, while most of the current concerns regarding the 2012 doomsday predictions are due to modern interpretations and straight-out inventions of different parties seeking fame or fortune based on dubious speculations and false proclamations about ancient Mayan culture; scenarios which create fears about an impending end of the world prediction are not uncommon in human societies. What is unique about the current Mayan Calendar end of the world doomsday predictions are, however, the number of sources from which they are being publically proclaimed. The usual modern profiteers one would expect to see promoting such doomsday scenarios have all become involved such as: Hollywood movies, mainstream network television segments, cable television documentaries, radio programs, public lectures, websites, and book publications too numerous to mention. In a modern society, most of the false hype leading to widespread misconceptions and fears are normally attributed to an extensive saturation of highly sensationalized mass media programming. However, the informational sources for these types of programs most usually first eminate from what are considered highly respected sources of scholarship. A short accounting of the findings in our investigation are revealed here with a listing of the major sources of mis-information about a Mayan doomsday prophecy given below:

In 2006, the History Channel produced a segment for their popular cable television series, Decoding the Past, entitled "Mayan Doomsday Prophecy" (click to see entire video), that described the ancient Mayan calendar as an instrument in which the "Maya calculated the exact date of doomsday." In their program's description it stated that the ancient Maya were "Masters of time.. (and) practiced prophets.. (who) predicted that the world would end on December 21, 2012!" Much of this so-called documentary's material was gathered from interviews taken with the well-known independent ancient Mayan researcher, John Major Jenkins - who would later express his great dismay about the tremendous inaccuracies reported in the show. In a attempt to disassociate himself with the producers of the documentary, Mr. Jenkin's eventually stated on his website that the show was an "error-riddled and flagrant attempt at fear-mongering and sensationalism" ( click to read Jenkin's full article response).

Other similar mainstream cable and network television programs immediately followed which also linked the Mayan calendar to other various doomsday predictions such as: an ABC News, 20/20 series segment entitled, "Last Days on Earth", which aired in 2006; a second History Channel follow-up segment for their cable television series Decoding the Past entitled, "Doomsday 2012 - The End of Days", which aired in 2007; an A&E produced program entitled, "Seven Signs of the Apocalypse", which also aired on the History Channel in 2008; and yet another History Channel produced documentary entitled, "Nostradamus 2012", airing in 2009.

While the power of media's influence can be easily seen through nationally televised programs, nothing can really compete with the far-reaching affect obtained in the release of a mainstream Hollywood film. In 2009, an epic orgy of earthly destruction was unleashed in the Sony Picture's blockbuster movie simply entitled, "2012". With a $250,000,000 production budget and worldwide gross of $766,812,167, this was a movie project of gigantic proportions. It's the kind of movie that director and co-writer Roland Emmerich is used to making. In 'Independence Day', he created a film where Martians are seen attacking the earth; in 'The Day After Tomorrow', global warming is seen triggering an instant ice age. Here in '2012', an utter destruction of the earth...