ABOUT THE MAYAN CALENDAR SYSTEM AND THIS SITE

Preface: Considerations for Reading Any Article on the Maya & Mayan Calendar

Readers of the articles enclosed on this web site should have a consideration for the following facts. The information gathered for the articles contained herein is drawn from many sources including: published books, scientific journals, documentary films and interviews of Mayan elders. The levels of careful research and deep scrutiny used in the examination of this given information was extreme. Nevertheless, in so much as the foregoing is true, all readers of any articles on the Maya, and most specifically ancient Mayan society (which isn't the focus here), should be acutely aware that the usual source from which cultural information is normally gained regarding any literate civilization is lacking; i.e., the original writings of the ancient Maya themselves. This extremely important reality warrants a degree of caution on all writings concerning the ancient Maya that's far too often not taken into account.

Tragedy of the Spanish Conquest & the Ensuing Speculation Amongst Scholars

To say that our modern understanding of the ancient Maya is deficient is an understatment in the extreme. Possibly one of the greatest rapes of humanity was the physical and cultural genocide inflicted upon the natives of ancient Mesoamerica by the Spanish. Subsequent to the burnings of all accessible Mayan literature by the Spanish conquistadores and Catholic clergy, what has remained in its wake is a collection of only four ancient Mayan books and a concoction of modern speculation. Albeit much of what's now believed is known with relative certainty. Yet, minus the revelation of more source writings, caution for definitives in belief should remain. A good summation of the Mayan calendar was given by Harvard archeologist, Herbert J. Spinden, in his book, The Reduction of Mayan Dates (1924).

"The invention of the Central American calendar in the Seventh century before Christ may be described with all propriety as one of the most outstanding intellectual achievements in the history of man. This calendar solved with conspicuous success the great problem of measuring and defining time which confronts all civilized nations. Moreover it requird the elaboration of one of the four or five original systems of writing the parts of speech in graphic symbols, and it conjoined with this supplementary invention of hieroglyphs the earliest discovery of the device of figures with place values in the notation of numbers. This time machine of ancient America was distinctly a scientific construction, the product of critical scrutiny of various natural phenomena by master minds among the Mayas. It permitted a school of astronomer-priests to keep accurate records of celestial occurrences over a range of many centuries, with the ultimate reduction of the accumulated data through logical inferences to patterns of truth." 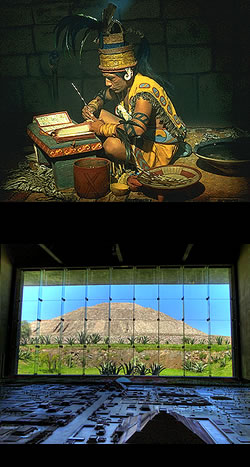 An ancient Mayan scribe is seen writing a codex. Only 4 are known to have survived.
From a museum window, the Pyramid of the Sun at Teotihuacán in Mexico is seen outside. 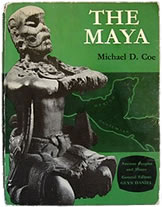 'The Maya' by Michael D. Coe

The Folly of an Academic's Pen

To the point: There has never been in any form of an ancient artifact found, whether that be a Mayan book, carving or inscription of any kind, anything to support the assertion that our ancient Mayan ancestors believed the world would end in 2012. While, there is much discussion about the completion of the Mayan calendar's 13th baktun (a.k.a. the Mayan Long Count Calendar or the "Great Cycle") on December 21, 2012 (the usually given date which is occassionally debated); the truth of the matter is, that, there's only one known ancient Mayan reference to this particular day. It exists on what is known as Tortuguero Monument 6, with a current tepid speculation purporting that it merely referenced a return of the Mesoamerican cultures' set of nine gods known as the "Lords of the Night". So then, where did this current frenzy of discussion about a Mayan doomsday prophecy originate? To be simple; it was from a book originally published in 1966 entitled, "The Maya", written by the then associate professor at Yale University, Michael D. Coe. On page 149 of his original publication (now in its eighth editon), Professor Coe wrote: "There is a suggestion [ from who? ].. that Armageddon would overtake the degenerate peoples of the world and all creation on the final day of the thirteenth [ Baktun ].. Thus ... our present universe be annihilated [on December 21, 2012]" Ever since the publication of this presumed authority's presumptuous statement, starting in the mid 1970s there has been a bevy of various authors who have latched onto these words without caring to do any further independent investigation of the veracity of such a pronouncement on their own. Hence the spread of a reckless and flippant falsity. It may interest readers to know that in Coe's book he also wrote of Maya astronomy & mathematics as being "primitive" and that "Science in the modern sense was not present." He may wish to consult with NASA to see how they'd respond on this.

Who Should I Listen To? Western Scholars or Native Source?

4 Ajaw, 8 Kumk'u, or August 11, 3114 BCE, is an important date. According to Ernst Förstemann, a German librarian with access to the Dresden Codex, and the majority of Western scholars who have followed his line of thinking ever since, it was the ancient Mayan date given for the creation of our universe or world. According to Mayan elders and a majority of the Mexican archeologists who remain unaffected by a U.S./Eurocentric perspective, it's the starting point of record for Mayan civilization and its calendar cycles. This is a vast difference. It's similar to the major difference of thinking that argues whether Columbus discovered America. Arrogance of attitude and a lack of acknowledgement for Mayan elders and aids has been and remains a problem on study of the Maya.